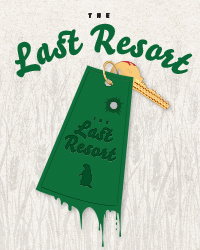 A New York restaurant owner on the run from the mob arrives in the last place on earth he thinks they might find him – The Last Resort in rural Saskatchewan. He is sure a mob hit man has tracked him down, but which of our characters is it? Is it one of the identical twin sisters? The police inspector? The older couple on their second honeymoon? The strange hotel proprietress? Or the agent assigned to protect him and play his wife? The Last Resort is where you want to be, especially if you have a secret. This hilarious musical is written by two Canadian theatre icons - combining the brilliant, winking wit of Norm Foster with the clever lyrics & music of Leslie Arden. Before you can say “whodunnit”, there are complications, a death, and of course, music!

Buy To This Event Directions